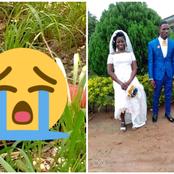 Report available has it that a man identified as Atta Michael has been arrested by the Abuakwa Divisional Police Command for supposedly killing his own six months wedded wife, Ama Boatemah, Atwima Agogo in the Atwima Nwabiagya South Municipality of the Ashanti Region.

The incident came as a shock to the residents as it is considered unusual in the community.

The mother of the deceased, Mad. Rose Anima who confirmed the unfortunate incident to the media said, they received the message from a group of young men who had embarked on a search for Ama that they found her dead body in the bush.

She said the deceased, Ama Boatemah left her marital home last Monday and the husband could not inform either the police or the parents of the deceased on that they untill only yesterday she (Anima) confronted him and asked the whereabout of her daughter.

“I vehemently suspect Michael (husband) for killing my daughter, because after exactly a week they got married, Ama came and complained to me that she was severely beaten by Mich which lead to losing her first pregnancy. Mich used to beat Ama on several occasions that’s why I suspect him for been responsible for my daughter’s death”. Anima added.

The almost-decomposition or decaying body of the deceased has been deposited at the Afari Community Hospital Morgue. Whereas the alleged murderer is the grip of the police.

The Assemblyman for the Atwima Agogo electoral area, Hon. Sarpong Awuah Latif also had this to say.

This Is What I Saw In Heaven That Everyone Should Know, Archbishop Duncan-Williams Drops Shocking Revelation