I Bought My Silicon Belly For GH¢30 – Says Takoradi Woman

The supposed heavily pregnant woman who claimed she was kidnapped and her fresh baby taken away, has said she bought the pregnancy prosthetics, popularly called silicon belly, which she has been wearing to make her look pregnant, for GH¢30.

According to Josephine Panyin Mensah, who has told the police she is 27 years, she bought the silicon belly at the Takoradi Market Circle but threw it into the bush while on the Takoradi-Agona Nkwanta trunk road when she was faking her kidnapping.

The accused person has also admitted that the MTN number 0599601438 through which the supposed kidnappers spoke to the mother, Agnes Essel aka Aunty Aggie, was her own old SIM card which she later discarded.

These revelations were contained in the accused person’s statement which was attached to the charges filed in court yesterday.

Appearing before the Circuit Court A in Takoradi yesterday, Josephine Mensah, whose self-kidnapping sparked public outrage after sending the police on a wild goose chase, was charged with publication of false news and deceit of public officer.

She pleaded not guilty to the charges and the court presided over by His Honour Michael Cudjoe Ampadu, granted her bail in the sum of GH¢50,000 with two sureties and one to be justified. 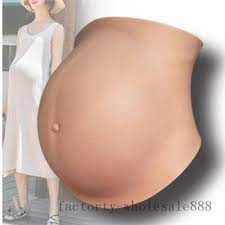 According to the prosecutor, Supt Emmanuel Basintale, the accused resides at Old John Sabbah Road in Takoradi, and on September 16, 2021, at about 4.05pm, Michael Simons of Columbia, Takoradi, who is the husband of the accused, informed the police that his wife who was 10 months pregnant and lived with her mother, Agnes Essel left home for a health walk but could not return.

The prosecutor said the mother of the accused also added that same day at about 3:30pm, an unknown caller called her on MTN number 0599601438 and she only heard the voice of accused crying that she had been kidnapped and taken to an unknown location.

In the course of investigations, the police discovered that the said number called from Agona Nkwanta in the Ahanta West District and was registered in the accused person’s own name. Police trailed the number there but did not find the accused.

The prosecutor continued that on September 21, 2021, at about 11:15am, while a massive search was in progress, police had Intel which indicated that accused had been found at Axim, the Nzema East Municipality of the region.

The police in Axim was informed and the accused was conveyed from the premises of the Jehovah Witnesses Kingdom Hall to Axim Government Hospital for treatment.

The prosecutor told the court that the accused later narrated that she was pregnant and kidnapped during a walk on September 16, 2021, at about 4:30am, by unknown people who covered her mouth with cloth making her unconscious.

She added that she met about 12 other unknown women kidnapped by her captors and they were all killed except her, and that she gave birth to a baby girl and afterwards falling unconscious for the second time and had no idea how she got to Axim.

The prosecutor said doctors who conducted examination on the accused at the Axim Government Hospital told police that they did not notice any postpartum sign. The doctors stated that the accused had not given birth within six days that she went missing and resurfaced.

The doctors added that no mark of violence was also noticed on the accused.

On September 21, 2021, the accused was discharged from the Axim hospital after she was attended to by Clinical Psychologists.

The police then took the accused person to Effia-Nkwanta Regional Hospital in Sekondi where she was again examined by doctors who also concluded that accused did not give birth to any baby within the six days that she went missing and resurfaced.

The doctors added that no mark of violence was detected on the accused.

Records at the Takoradi Hospital, also called European Hospital, where the accused claimed she attended antenatal care, revealed that on September 11, 2020, she attended gynaecological clinic with complaints of lower abdominal pain and had pelvic ultra sound which showed that she had pelvic inflammatory disorder and not pregnancy.

As many as five lawyers in the Sekondi-Takoradi Metropolis represented the woman in court yesterday. The lawyers, led by Fiifi Buckman, claimed that they are representing the accused person pro bono.

They argued that the police were the custodians of the law and that they knew that all the confession statement they claimed the woman had made should have been in the presence of the accused person’s counsel.

“The facts by the prosecution cannot be the whole truth. We are here not to be carried away by sentiments. I pray this honourable court to grant her bail and that Josephine will not jump bail. She will cooperate effectively with whatever the court will say,” one of the lawyers, Joseph Abekah, said.

Another counsel, Samuel Agbotah, also prayed the court to exercise its discretion in favour of the accused and grant her bail since the charges preferred against her were the simplest of all the offences that warrant the grant of a bail.

However, the prosecutor made it clear that the accused person was not in police custody seven days before she was brought to court as had been perceived.

He said the suspect was at the Axim Hospital and the Effia-Nkwanta Hospital after she was found and not in police custody.

“She was only released to the police on Friday and so she was in our custody for two days and not seven days,” Supt Basintale said.

“The accused confession statement was taken at the hospital in the presence of her own mother, Agnes Essel, and she voluntarily gave the information,” the prosecutor revealed.

Granting the bail, the judge said, “As submitted by the lawyers, the offences are all bailable and that the accused person was not guilty until proven guilty.”

He said in the mind of the court the two offences are the least of all but because it had been connected to kidnapping, “It would have been a simple issue between a husband and a wife.”

The judge then granted the accused person bail to reappear on October 14, 2021.

The lead counsel, Mr. Buckman, explained to journalists after the proceedings that the case was adjourned to enable the prosecution to bring all their documents that they intend to rely on for the matter to proceed.

He said it is the court that would determine whether the alleged confession statements by his client were done under duress or not.

Many people thronged the court’s premises to catch a glimpse of the lady whose claims sparked outrage.

Transport fares may go up but not from Monday – GPRTU clarifies

Two arrested over alleged plot to kidnap their supervisors for ransom