Emma Florence Yaa Adinyira Amedahe, personal assistant to the wife of Ghana’s first President Kwame Nkrumah has opened up on the relationship that existed between Nkrumah and his Egyptian wife, Fathia.

Yaa Adinyira in a JoyNews interview stated that Fathia confided in her about marital issues which included her unhappiness with Nkrumah’s cheating behavior.

She claims to know some of Fathia Nkrumah’s family members in Egypt as she did quite a number of trips with the former First Lady.

“We used to talk, she even told me how her husband was treating her. I went to Egypt with her, so I know a lot of her family members. Fathia saw me as a sister, and I have also liked her as sister. She once told me Osagyefo didn’t like her and that he was a womanizer,” she said.

Yaa Adinyira also disclosed the treatment meted out to her by the military when they took over Nkrumah’s government in 1966.

Another Famous Kumawood actor passes on

“The coup cut short so many things, so the one who made the coup, General Kotoka, I don’t like to hear his name at all. Some of us suffered in that coup. For instance, I was the only woman who stayed with the men in the State House. I was slim by then, I looked like a little girl, and not how I am looking today.

“So when the soldiers drove to the State House, they went to every room and brought all the workers and left their wives. I was the only woman worker. They beat me and the men workers mercilessly and kicked me too. Even when they slap me and I fell down they kicked me as if I were a football.

“They stamped my back, my waist, and my lower abdomen. Ah! I suffered,” she exclaimed.

“One of the soldiers lit a cigarette with his lighter and then used the burning end to burn me. I was shouting, he slapped me again and told me not to shout. I really suffered,” she said recounting her ordeal. 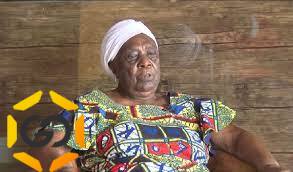 She disclosed that the soldiers did not give Nkrumah’s aides and workers at the presidency room to pack out from the place.

“Whilst some were beating us, some were also in our rooms packing our belongings. They took everything from us. They marched you to your room and make you carry everything they see on your own head make sure you dropped them in their vehicle,” she said.

She said the experience left her traumatized, as she had not experienced anything of that sort before.

“I have never seen a coup before, I heard about the Congo Coup and I witnessed one in Egypt too. That’s all I know, but when I saw this one it was terrible.”

Kwame Nkrumah got married to Fathia Nkrumah at the Christianborg Castle on December 31, 1957. They had three children, Samia, Gamel, and Sekou Nkrumah.