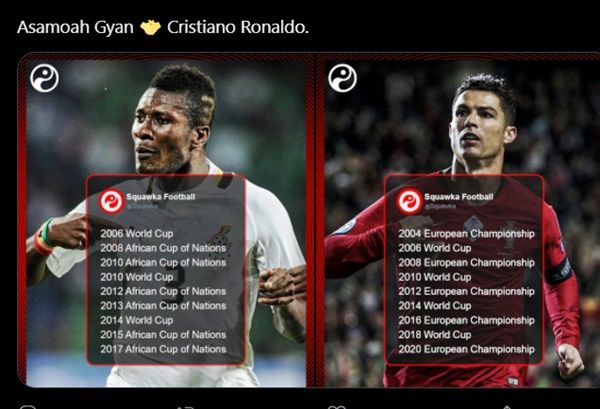 The iconic Juventus forward joins Asamoah Gyan as the only two players to hit the back of the twine in nine consecutive major international tournaments.

This means Ronaldo has tied the record held by Gyan as players who have scored in nine different international tournaments.
Ronaldo scored two late goals to help Portugal begin the defense of their European Cup campaign with a 3-0 victory in Budapest.

Gyan is on the cusp of retirement from international football after being snubbed by coach Charles Akonnor for Ghana’s last three call-ups.

The Legon Cities FC striker reacted with a silent emoji, indicating his displeasure with how he’s been treated by the Black Stars hierarchy and some advocates of the team.

Abramovich sends his son out to try and secure club-record…

Bruno Fernandes sends message to Raphael Varane ahead of…